I'm day 3 post op and am actually feeling pretty good.  The best news is that barring anything out of whack with my final blood draw, I should be going home this afternoon!  Woo hoo!

My oncologist found more cancer than he was expecting but was able to get about 80-90% of it.   There were some small spots around the blood supply in my small intestine ... to remove that cancer he would have had to remove the small intestine.  He felt that I would be better off having chemo deal with it, so when I resume chemo, I'll have another chemo added to my earlier regimine. Tissue samples were sent off for testing ... that will give him an idea if there are other chemo drugs that might be even more effective.  He is optimistic that chemo will take care of what he couldn't get and imagines that I'll resume chemo in a couple of weeks ... I have an appointment to see him on the 12th and should know more then.

I have had very manageable pain all along, not at all what I was expecting ... but for which I am very thankful. I've also had a couple of minor bumps along the way, but they have been easily resolved.

My sisters were here while I've been in the hospital, and my dad came down for a short visit on day 1 post op.  And of course, DD  and DH were here throughout the entire stay. The entire medical staff here were very friendly and helpful ... but I won't complain if I don't have to come back. Ha!

I hope that whatever you have planned for today includes a little something that brings you joy ... have a great day!
Kathy
Posted by Kathy ... aka Nana at 10:07 AM 30 comments:

Another Blogging Break ... for awhile

Spring has decided to tease us again.  A couple of nice, warm days early this week have given way to chilly, rainy weather.  I'm not complaining, though ... what we're going through is nothing compared to what Winter Storm Selene is/will be dishing out.

The Ts finished up their winter swim season with some fabulous times at the Area Championships. They've got a 2-month layover until summer swim season begins, but they're staying in shape by swimming at the Y 2-3 days/week.

My last chemo (for a while) was on the 8th and since then, we've been waiting ... and our wait is just about over. We're now 3 days away ... in fact, in exactly 3 days, we'll be on our way to the hospital. It's beginning to feel real, and it's beginning to be crunch time here, especially for DD who is trying to get all her ducks in a row, preparing for being with me while I'm in the hospital while juggling all her other responsibilities.  If you all would be so kind to keep us in your prayers, we'd certainly appreciate it.  Please pray for a successful surgery, an easy and quick recovery, and peace for me, DH and DD.

Spring is just a big tease

Ah, what a delightful glimpse we had of Spring on Tuesday when the high was near 80 ... alas it was just a glimpse because the temperatures are going to be dropping on Wednesday ... with lows in the low 30s by the end of the week.  :-o

I'm not the only one who's ready for spring. The trees are budding out, and some spring flowers are blooming. 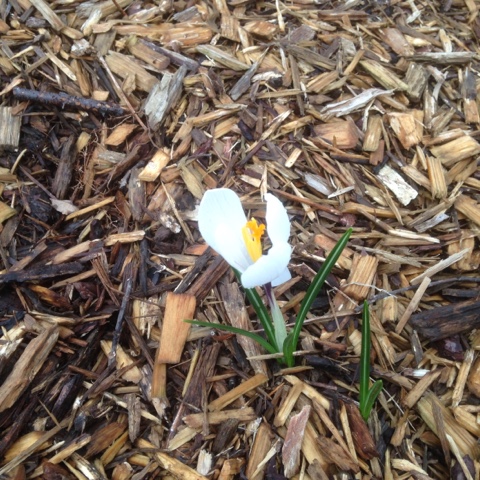 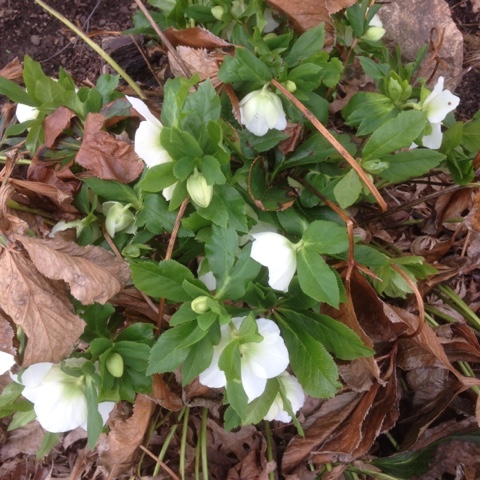 Which only fuels our desire to see Spring arrive ... and stay.

Last week, I had my last chemo infusion until after my surgery. It felt a little strange not to head over to Siteman Tuesday morning ... so DH and I "celebrated" by having breakfast with three couples from our subdivision.

The Ts are gearing up for their YMCA area championships this weekend.  I can't wait to see them swim.  T#4 has finally decided that it's time for her to get serious about swimming and finally swam the length of the pool (the requirement to join the summer swim team). So this summer I'll get to see all 4 swim!

I hope that whatever you have planned for today includes a little something that brings you joy ... have a great day!
Kathy
Posted by Kathy ... aka Nana at 6:01 AM 20 comments:

The last thing I want is for this blog to become a blog of posts about my cancer.  While my cancer dominates this season of my life, there is certainly more to my life than cancer ... I definitely don't spend my waking hours focused on cancer and have come to realize that this diagnosis has come with many blessings.

Here are but a few:

1. The realization that more people care about me than I'd realized.  As an introvert, a homebody, with a good many acquaintances but few intimate, close friends, I didn't realize so many people cared as much as it's apparent that they do.

2. The restoration of a very close friendship that had ended abruptly almost 10 years ago.

3. The realization that every day is a gift and that it is entirely up to me to make the most of each one.  I realize that adding life to my years is every bit as important as adding years to my life.

4. The opportunity to use this journey to bring glory to my Father.  People think that it might be easy to trust God when times are good ... I want to be an example of how it's possible to trust Him when times are difficult.

5. The realization that much of what consumed me prior to my diagnosis was unimportant ... now I find that my focus is on what is important: loving people, living life to its fullest both now and all of eternity.

6. The strengthening of my relationships with my husband and my daughter.  I can't imagine being on this journey without their love and support.

Now an update.  The Ts had a 3-day meet over the weekend at a Y about 45 minutes from here.  All 3 did very well.  Have I said how much I enjoy watching them compete?  Ha!

I had my last pre-surgery infusion yesterday.  No more weekly blood draws and no more chemo until mid-April. I also had a CT scan and should have had an appointment with the pre-surgical assessment folks ... someone forgot to make that appointment.  I will go back a week from this coming Thursday for my assessment.

After we finished up at Siteman, DD headed up to campus for a meeting ... she's been admitted into the nursing program.  Woo hoo!  DH and I decided to make a date out of the rest of our day.  We did a little window shopping at the nearby mall and finished up our date with dinner at Maggiano's.

The rest of my days since I posted last were fairly uneventful ... reading, working puzzles, a little stitching, and enjoying my Ts.

I hope that whatever you have planned for today includes a little something that brings you joy ... have a great day!
Kathy
Posted by Kathy ... aka Nana at 6:00 AM 25 comments:


CANCER UPDATE:  I am now down to one more chemo treatment, after this morning's infusion. Then I'll have a short break before surgery on Monday March 28. The good news is that I'll have the first surgery of the day at 7:30.  The bad news is that I'll have to be there at 5:30. :-o  I will have three more sessions (9 weeks) of chemo after my surgery, starting a couple of weeks after surgery, depending on how I'm healing. Since I'm tolerating chemo so well and since it seems to be doing what it's supposed to be doing, I'm not sweating more chemo.

Speaking of the chemo doing what it's supposed to be doing, last week I got more good news on my cancer markers. They're down by half again.  They're at 192 now, which is a good drop from the 1,441 on December 4. 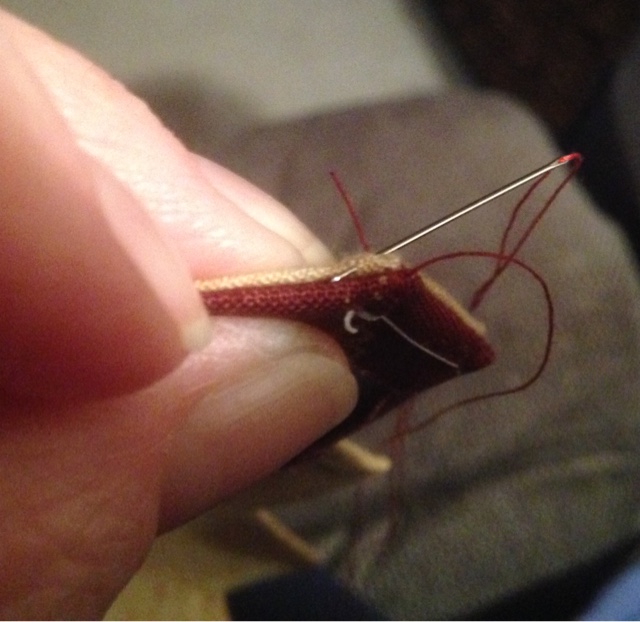 I'm adding the red connectors to my blocks.  When I've finished that step, it will be time to determine the layout of the quilt so I can ensure that my blocks are evenly distributed ... while my blocks are scrappy, I have the same fabrics in more than one block ... each block is different, but I don't want to have two blocks side by side with the same fabric, etc.  When I've determined the layout, I can add more start stitching blocks together. There's probably an easier or more efficient method to piecing together a MWFG but I don't have a pattern (I've only used a pattern twice in all the years I've quilted). And as long as I end up with a finished MWFG, no one will ever know if I made it a little more difficult than it needed to be. Ha!

LIFE UPDATE:  DD and I are really on a puzzle kick!  Which might explain why I'm working so slowly on my MWFG. Ha! 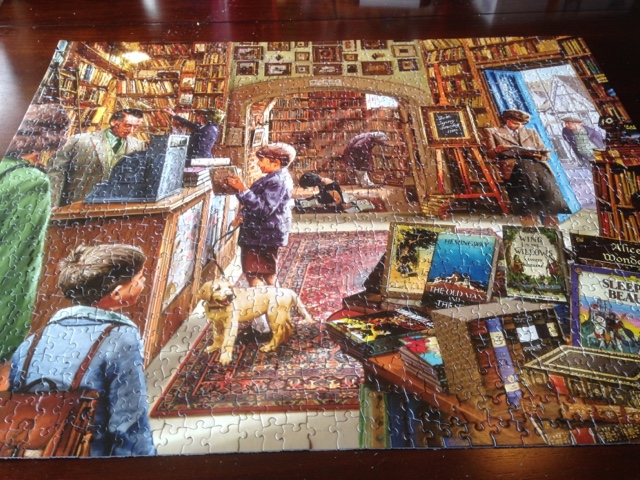 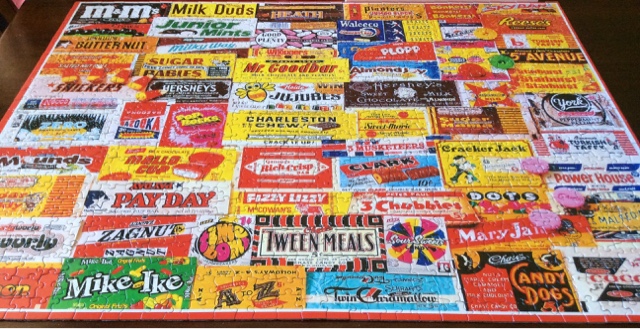 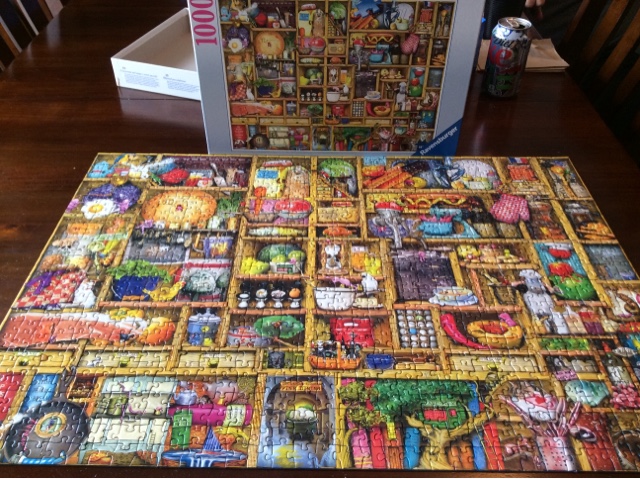 These are just three puzzles we've worked since my last post.

This past weekend the Ts swam at the USA regional championships; this was a qualifying meet for which swimmers had to achieve a minimum time.  The competition at this meet was fiercer than at the YMCA meets, but the Ts did pretty well ... I was so proud of them.  ;-)

We got snow on Wednesday. It was rather comical listening to the tv meteorologists trying to keep up with the forecasts, which ranged from >1" to 5-7". We got a total of 5.5", but there was never that much snow on the ground, thanks to temps being above (barely) freezing all day.  And by early afternoon there was at best just 1/2" snow in the ground.  I'm ready to be done with winter ... bring on spring!  And Daylight Savings Time, too!  It will be awesome to be able to have a little daylight after dinner, instead of feeling like it's time to go to bed.

We had spring-like weather over the weekend.  I was able to get out and get in a couple of nice walks ... and saw this on my walk yesterday afternoon.  A little hint of spring? 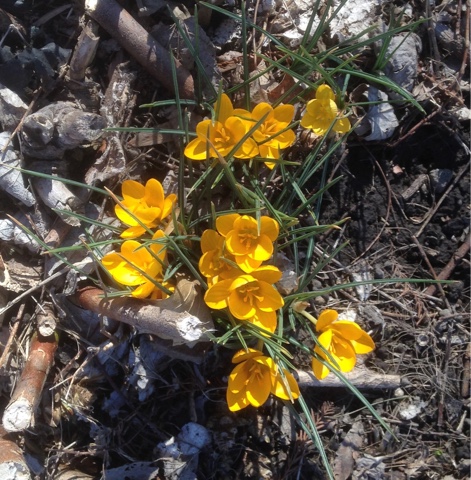 I hope that whatever you have planned for today includes a little something that brings you joy ... have a great day!
Kathy
Posted by Kathy ... aka Nana at 4:30 AM 28 comments:

Kathy ... aka Nana
Southwestern Illinois, United States
I'm Nana of 4 adorable Ts; Mom of a lovely woman who happens to be my BFF; wife of a sweet, sweet man; daughter of the Living King. I love to quilt, spend time with my grandkids, read, watch Cardinals baseball and Blues hockey, bike, travel (especially to the beach).