I can’t believe that I haven’t done a Hodgepodge since Jan. 2!  Hope I remember how.  Ha!

1.  In the USA this coming Sunday millions will be watching as the Baltimore Ravens take on the San Francisco 49's in the Superbowl.  What was the last event you attended that could be described as super?

3. How do you feel about wings?  In case anyone is confused, I'm talking the edible appetizer kind.  What's your preferred seasoning on a wing-hot, mild, teriyaki, sweet and sour, other?  Do you make your own or is there a favorite place you like to go for wings?

There used to be a sports pub in the nearby town that had The. Best. Wings. Ever!  It was part of a regional chain that unfortunately hasn’t fared well in the last 10 years … the only one remaining is about an hour away.  The restaurant that moved into the vacated spot of the local sports pub has very good wings, just not quite as good as the earlier pub.  I prefer hot.

4.  As long as we're talking sports today...have you followed the Lance Armstrong story?  Did you watch his interview with Oprah and if so what was your reaction to his confession and subsequent remarks?

I didn’t see the interview so I have no reaction to his confession.  I don’t understand why these athletes think they can hide their transgressions … haven’t they learned that sooner or later they’re going to get caught?  And I don’t understand how they think that we’re just going to forget all their protestations of innocence?  <sigh>

I can think of no particular question that I hate to be asked.

6. The coaches in this Sunday's big game happen to be real life brothers.  Jim Harbaugh coaches the 49er's and his older brother John Harbaugh coaches the Baltimore Ravens.  Were you and your sibling(s) competitive?  In what way? Are you still?  If you're an only child how did you handle competition growing up?

Yes, I was and am still very competitive.

7.  What's your favorite game involving a ball and when did you last play?

My favorite game involving a ball is baseball, but these days I’m a spectator, not a participant … not that I was very much of a participant.  My favorite activities as a child were more sedentary ones, but I did play a little baseball now and then … the kids in our neighborhood would frequently get together and play some baseball in our backyards, and I could always be talked into playing so we could field two teams.

8.  Insert your own random thought here.

I do believe I’ve come down with something … my guess would be bronchitis.  All I can say is if I have to suffer through this, I’m glad I got it now, rather than 3 weeks ago.  ;-)


Our cruise was over … but it wasn’t time to go home just yet.  After we were shuttled back to our car Sunday morning, we took off for Orange Beach, AL where my dad spends a couple of months every winter.

While we were in Orange Beach, we visited Johnson Beach, part of the Gulf Islands National Seashore and one of the most beautiful beaches we’ve ever seen.  These dunes were at least 10 feet tall. 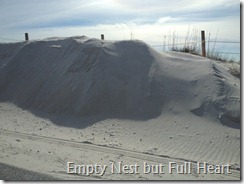 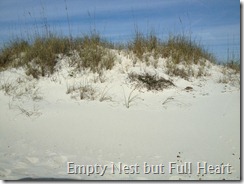 We checked out the new ballpark in Pensacola, built for the Blue Wahoos, the AA affiliate for the Cincinnati Reds. 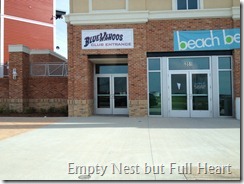 We also ate lots of seafood. 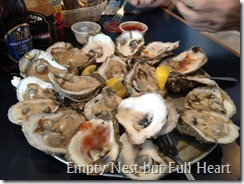 And we saw plenty of beautiful sunrises and sunsets from the balcony of my dad’s condo. 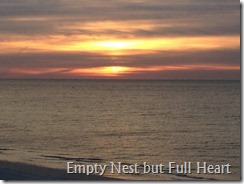 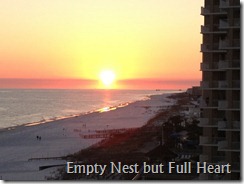 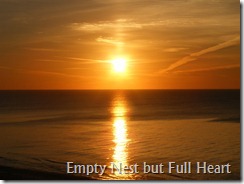 
The first two full days onboard were “at-sea” days, spent lounging on the pool deck.  As much as I enjoyed the ports of call, I have to say that I enjoyed being pampered on the days at sea as much, if not more.

We visited St. Thomas on Day Three … we chose to make it a beach day, visiting Sapphire Beach.  The water was crystal clear ... I could see fish even from the water's edge.
I  had hoped to do some snorkeling, but without my glasses, I’m as blind as a bat.

Day Four found us at St. Maarten, where we elected to take a tour of the island.

One of my “must-do’s” when traveling to the ocean is to get a picture of a sunrise or sunset on the water … with a cruise, I was able to do both. 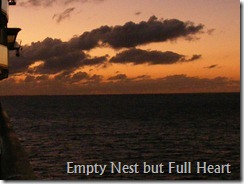 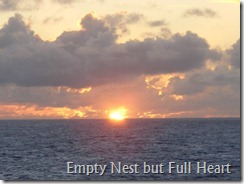 Reluctantly we packed up Saturday evening for disembarking Sunday morning.  While we still had more traveling to do (and were looking forward to it), we just weren’t ready to leave the ship.


Sunday morning finally came … all the planning and dreaming were finally coming to fruition.  We stayed at a hotel that offered a park and cruise package, so we met in the lobby at 9:00 for the shuttle to the Port.  There were others in our shuttle … a couple from Tampa who’d cruised many times before and gave us lots of good advice and a family from Edmonton who were going to cruise on Disney.  I don’t think any of them were as excited as we were.

So you can imagine how we felt when we saw this: 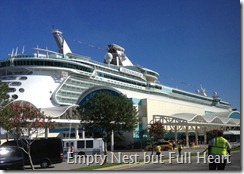 We were so overwhelmed by the sheer size and beauty of the ship … it was hard to take it all in.  We walked down the Promenade. 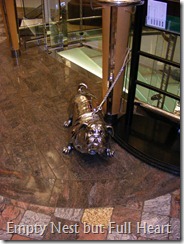 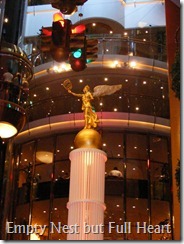 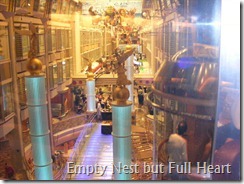 (this one was taken from inside the elevator)

We then checked out the Lido Deck where we grabbed lunch  and checked out our view of the Port.  After a little bit, we were able to access our stateroom. 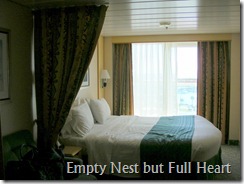 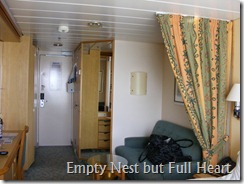 After we had settled in, we decided to sit out on our balcony … and noticed that we were moving!  Our cruise was officially under way.  It didn’t take long before we were truly out to sea. 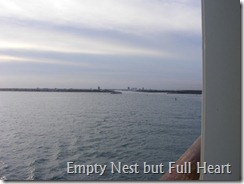 Before we knew it, it was time to head down to the dining room (I can’t believe I never thought to take my camera down to the dining room … although I suppose that it doesn’t matter … I suspect that my mediocre photography skills wouldn’t have been able to capture the beauty of it all).  We were assigned to a table of 8 … there were 2 couples already seated when we arrived.  Just as we were making introductions, the wife of the one of the couples proceeded to make a scene about the table assignment – turns out she was a retired waitress and didn’t want to sit that close to the servers’ station.

After the drama died down, it was just us and another couple (we never did see the fourth couple all week) … and while it would have been nice to have gotten to know some other people as well, it was nice to have the table to ourselves … we got to know the other couple very well, better I suspect than we would have had our table been full.

By the time we made it up to our stateroom, we were exhausted and ready to call it a day … a full and exciting one.

Our trip started on Tuesday, January 8.  Yes, I know that we were supposed to leave on Wednesday, the 9th.  But when DH got home Tuesday afternoon after running a few errands, I flippantly remarked that I was ready to leave right then.  He surprised me with a response of “Let’s go!” … and got up to start loading the car.  I certainly wasn’t going to argue with him.

We were on the road by 3:00 and pulled into Paducah, KY by 6:00.  While we didn’t cover a whole lot of ground that first day, we did get a good start on our trip … and there was the added benefit of getting a good night’s sleep that evening.  I don’t know about you, but I have a hard time falling asleep the night before we leave … you’d think after as many trips as we’ve taken in the last several years that I wouldn’t be affected by pre-trip excitement, but the truth is I still am.

An additional benefit was that we were able to get through Atlanta very early Wednesday afternoon … we sped right through without a single slowdown.  We stopped that evening in southern Georgia, giving us a 5-hour drive to Cocoa Beach on Thursday.

I’m sure that you’ll be surprised to know that our first stop in Cocoa Beach was the beach. 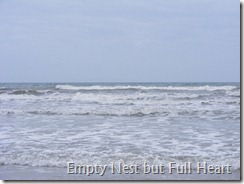 I can’t tell you how great it felt to dig my toes into the sand.  There’s just something about being at the water’s edge that lifts my spirits and refreshes me.

Friday we drove up to the Kennedy Space Center.  The Space Race was an integral part of our childhoods, so we were excited to visit KSC … it brought back so many memories.

We had dinner that evening at a restaurant in Port Canaveral, where we saw the Disney Dream depart for the Bahamas.  It was exciting … we knew that in a just two days, we’d be traveling down that same waterway. 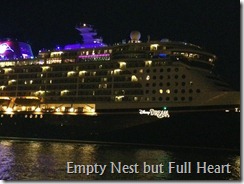 We got a kick out of the ship’s horn that blew out excerpts of Disney Tunes as it passed by.

We took it easy Saturday, lounging at the pool … practice for our cruise.

Tomorrow I’ll share the highlights (and pictures) of our cruise, so stay tuned.

I don’t know how many fragments I’ll have this week, but Friday just isn’t Friday without a few fragments, right?

As we were heading back home Wednesday evening, God provided us with a beautiful sunset.  Do you know how difficult it is to take a picture of something in a moving vehicle?  And no matter how I tried, I just couldn’t get a photo that did it justice (I wish I hadn’t packed away my “real” camera).

As beautiful as the sunset was Wednesday, God outdid himself yesterday.  Thankfully I had unpacked my “real” camera.

I got a surprise in the mail yesterday (I’m not sure when it was mailed … I got it yesterday because we had our mail held until we returned from our trip).  At the beginning of the month, Tami, a bloggy friend at Pretty Purplexing, offered to send a small gift to the first 10 commenters … and I was lucky enough to be one of those first 10.

I LOVE how she combined our two loves – my love of quilting and her love of purple!  Thank you SO MUCH, Tami!

It was a mixed bag in the St. Louis sports world last Saturday.  The Blues won their season opener, and St. Louis icon Stan Musial died.

I am caught up on laundry and emails, but since I didn’t get to my backlog of blogs, I’m falling further behind.  Maybe I should have done some blog reading instead of starting that new puzzle.  ha!

Our forecast for late last night/early this morning was for sleet and freezing rain.  Thankfully that never materialized.  I LOVE snow … but sleet or ice?  No thank you!

It turns out that I had more fragments than I’d anticipated.

Kathy ... aka Nana
Southwestern Illinois, United States
I'm Nana of 4 adorable Ts; Mom of a lovely woman who happens to be my BFF; wife of a sweet, sweet man; daughter of the Living King. I love to quilt, spend time with my grandkids, read, watch Cardinals baseball and Blues hockey, bike, travel (especially to the beach).